Mistress Nakia has a big ass. This guy liked petite girls and he tried to make fun of her. She did not take the joke well but instead of apologizing, the guy doubled down. He could not see how she would beat his ass. But she did. She dragged his ass to her house nearby where she turned him into her human toilet. She fed him shit and piss and he ate and drank it all.

Mistress Anna only cares about results in her company. Anyone who works for her knows it. This new guy did not know it and when he was told about it, he took things for granted. He was however surprised when she punished him cruelly using her shit instead of firing him. She forced him to eat her shit and then told him he had to meet his targets. There was no quitting.

Goddess Amirha wanted to humiliate this loser. She went to his house and she found him playing video games. She tied him up in plastic film and she facesat on him. She had him open his mouth and eat her shit and drink her pee. To further humiliate him, the mistress played his video games while she was humiliating and degrading him. He was powerless and defenseless and could not do anything about it. He however learned his lesson.

Lady Yuna tortures boyfriend then breaks up with him

Lady Yuna did not like it when she learned that her boyfriend said nasty things about her behind her back. She did not want a boyfriend who was not loyal and who did not have her back. She had to show him what she did to people like him. She shit on him and she forced him to eat her shit. She also had him drink her urine before she broke up with him.

This guy had conned mistress Jane's sister. She could not let him get away with messing with her small sister. She had to defend her and she did. She hunted down the guy and when she caught him, she tied him up and she turned him into her human toilet. She forced him to eat and swallow her shit and he had no choice but to do it. Then she made him go and apologize to her sister and refund what he conned her.

Mistresses shit on loser for fun

Mistress Mara and mistress Rosella like to identify vulnerable losers and then humiliate them. That is what the mistresses did today as they made this loser lie down and eat their shit. They made him do it while he was naked and he had no say in what they did to him. The poor guy had to drink pee as well but he was grateful they did not beat him up.

Mistress Mystique punishes bully for messing with her

Mistress Mystique is not one to mess around with. She is the kind that you avoid at all costs. This guy was a bully and he thought he could handle her and even bully her. But he was shocked when the tables were turned on him and she cruelly punished him for trying to mess with her. She tied his hands and she used an improvised toilet seat to shit on him.

Mistress Giorgia and her scat fetish

Mistress Giorgia wanted her slave to have a winning mentality. She wanted to give him an assignment and she wanted him to win it. There was a lot at stake and she could not contemplate failure. She had to make sure he was ready. When she sensed he was slacking off, she forced him to eat her shit. It was degrading but it helped him work harder to avoid having to eat it and in effect, do what she wanted.

Mistress tortures guy for messing with her money

This mistress does not mess around when it comes to money. If you mess with her money, you will only have yourself to blame when she punishes you. This loser did and he was shocked at what she did to him. The mistress turned the guy into her own human toilet and she made him eat her shit and drink her pee. And it was not a choice but a must. 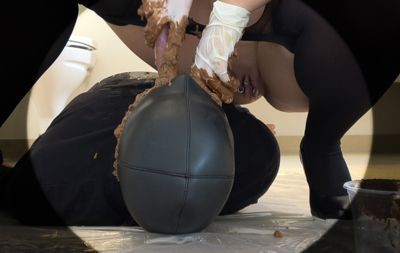 Mistress Milana and her fetish for shit

Mistress Milana has a fetish for shit and she likes to do nasty things with her shit. She likes to play with it and other times like today, she uses it to punish anyone who messes with her. This guy had brought her the wrong package and she was not happy. She needed it urgently and for his incompetence, she punished him using her shit which she made him eat.